Middletown started as one of a series of settlements which sprang up along the Valley Pike within the boundaries of the 17th Century Fairfax Grant, a political payoff to allies of the King during the civil war in England in the mid-1600’s. The Valley Pike evolved from an early Indian trail that divided the grant as it ran through the Shenandoah Valley and allowed early settlers to move southward through the territory. Some of the first documentation of early Middletown dates back to the late 18th century when “Senseney Town” was laid out by Dr. Peter Senseney and his wife Magdelen, German settlers who had migrated from Pennsylvania. By the time Middletown was established as a town by an act of the General Assembly in 1796, the 50-acre community was already laid out in a grid street pattern with 126 lots. Although Middletown did gain some prominence in the manufacture of quality precision instruments (clocks, watches and surveying equipment) as early as 1786 by Jacob Danner and Anthony Kline, the town has remained a rural community throughout its long history. It is thought that the distance of Middletown from any stream capable of generating waterpower discouraged early industrialization and was a major reason the community never developed as an industrial center. By 1800, the census listed its population as 144 free citizens and 12 slaves, and by 1878 it was incorporated as “Middletown” by an act of the General Assembly.

The history of the Town has been one generally of providing business, educational, religious, and social opportunities to the surrounding countryside as well as serving the needs of travelers in the valley.

Around 1889, Middletown was tarnished by one of the many land promotion schemes then common. “New Middletown” was to be developed just west of the town boundaries to include the Hotel Belleview (cost $25,000.00) and “portable houses.” Embracing nearly 1,000 acres of land, it even offered free sites for manufacturing purposes to attract mills, a tin can factory, and others. Sadly, the boom failed with many people losing money and land.

On a more lasting note is the small tavern built in 1797 by Mr. Israel Wilkinson.  Over the decades, and then centuries, it expanded to become a stagecoach relay station and a successful Inn. It is still in operation today as The Wayside Inn and Restaurant, and is one of the oldest continuously operating Inns in the country. 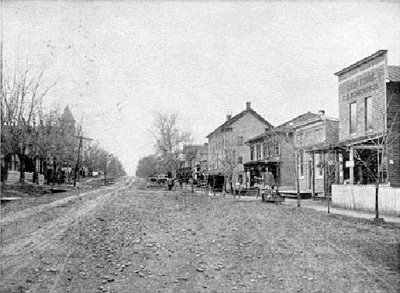 Middletown earned a place in our national history through its association with major historical figures in both the colonial and Civil War eras.

Between 1794 and 1797, Major Isaac Hite, Jr. and his wife, Nelly Conway Madison (sister of President James Madison), built a large limestone mansion one mile southwest of Middletown. Belle Grove, as the house and 7500-acre plantation became known, had the assistance of Thomas Jefferson in its design. The mansion was restored in the late 1960’s and is under the care of the National Trust for Historic Preservation.

The American Civil War brought the armies of both sides into direct conflict in the singularly most destructive event in the history of Middletown.  On October 19, 1864, the Confederate Army of Northern Virginia under the command of Lt. Gen. Jubal Early, nearly overwhelmed the Army of the Shenandoah under Maj. Gen. Philip Sheridan, encamped around Belle Grove, in a surprise dawn attack.  The Battle of Middletown, now known as the Battle of Cedar Creek, flowed north for over five hours through the heart of the small community, only coming to a pause on its northern boundary near today’s Lord Fairfax Community College because of the exhaustion of the combatants.  The famous, if inaccurate, poem of Sheridan’s ride is an account of the General’s race from Winchester toward Middletown.

Dramatically rallying his troops, General Sheridan reversed the fortunes of the victorious Confederates, causing another ferocious four-hour battle to again push through the heart of Middletown, finally destroying the Army of Northern Virginia as an effective fighting force. Twelve Union Army enlisted men and nine officers were awarded the Medal of Honor for gallantry during the battle. Casualties for the Union totaled 5,665 (644 killed, 3,430 wounded, 1,591 missing). Confederate casualties are only estimates, about 2,910 (320 killed, 1,540 wounded, 1,050 missing). According to James Taylor, a reporter and artist with Frank Leslie’s Illustrated Newspaper, “on my route out Church Street, I am greeted on each hand with the evidence of the fierce fighting in the struggle back and forth during the morning and evening of the 19th, in the buildings and fences, which were peppered like sieves.” Today, many old homes in town lay claim to stories of bullets and cannonballs passing through their walls that day.

In an ongoing effort to protect both Belle Grove and the battleground, Cedar Creek and Belle Grove National Historical Park became the 388th unit of the National Park Service on December 19, 2002.