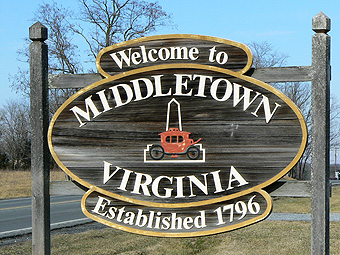 Located near the junction of I-66 and I-81 in the northern Shenandoah Valley, the growing community of Middletown lies just 45 minutes west of Dulles Airport. Whether you’re in search of history, good food, antiques, wine tasting, or just a quiet weekend, Middletown offers a central destination to begin or complete that journey.

“Meet Me In Middletown”

Just as Judy Garland encouraged everyone to join her and her friends at the 1904 World’s Fair in her fictional hometown of St Louis, “Meet Me in Middletown” is an invitation to step back into the nearly forgotten era of small town America.

Visitors can follow in the footsteps of many famous names in American history who have walked her streets. Never claiming to have slept here, a young George Washington did serve part of his surveyor’s apprenticeship as a 16 year-old boy transiting what is today’s Main Street as he surveyed Lord Fairfax’s land grant in 1748. Reputed to have been settled in 1750, Middletown was chartered as a town in 1796 by Pennsylvanian Peter Senseney, and although his burial site has never been confirmed, the channel race along Meadow Brook as well as the grinding stones from his early grist mill can still be seen today. By the start of the 19th Century, noted clock maker and silversmith Jacob Danner would hang his hat in Middletown. His home, on the corner of Main and Second Streets, still stands today. Closely following Jacob was James Ridings who designed and manufactured an early grain thresher in 1817.

During the American Civil War, Middletown changed hands so many times that it was said the opposing forces agreed not to burn down the historic 1797 Wayside Inn after each retreat because they expected to need it again during the next advance! That’s probably one of the many reasons why the Wayside’s former owner, Mr. Leo Bernstein, was able to lay claim to his boast of it being the oldest, continuously operating Inn in America. In 1862, a Confederate army under the command of Colonel Stonewall Jackson physically dragged multi-ton steam locomotives down that same street in what became known as the Great Train Raid.

Each year on the third weekend in October, Middletown plays host to thousands of Civil War reenactors and thousands more spectators as the Cedar Creek Battlefield Foundation recreates the 1864 Battle of Cedar Creek. Unsuspecting visitors are regularly treated to a surprise as they round a corner only to meet ladies in fabulous Civil War era ball gowns and their gentlemen military escorts walking through town.

Of more recent vintage, country and western star Patsy Cline was well known to the local citizenry in the late 1940’s. Before becoming famous, young Patsy would make regular visits to the Saturday night dance at the Middletown Fire Hall where it was said she would join in the fun and often sing with the band.

Middletown, population 1265 as of the 2010 census, still has but one traffic light and most folks are known by their first name at the local Post Office. Yet, while firmly rooted in the past, this small Shenandoah Valley community looks to a vibrant future while still maintaining its small town charm.